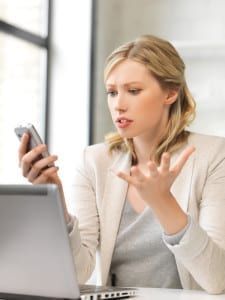 Love it or hate it, text messaging is increasingly becoming part of the dating world for all ages. As a Phoenix Dating Coach and Matchmaker, I am talking more and more with single men and women who want help in deciphering what texts really mean, when to text and what to write in a text. Are Your Text Messages Driving Him Away?

TEXT DATING -is a confusing and new world to many. In this dating advice blog, I will discuss a few common ways women drive men away with texting.  And I will start with a true story, which unfortunately happens too frequently.

Beautiful woman meets handsome man. It was two attractive, smart and confident people looking for “the relationship” that would lead to a happy marriage. After their first date, the man said he had never felt such chemistry and it was the BEST first date he had ever had. Although a cautious man, he was so sure about her, he took down his online dating profile but didn’t tell her.  He knew it was too soon but he didn’t want to see any other women. She was so happy and called her mother, hoping she had found her “one”.  This beautiful young woman had been on so many bad dates, that she was excited to meet a guy who was good inside and out. And so the love story began.

After a few dates, there was so much physical chemistry and they both went further than planned, yet it felt to them right to them.  He felt she could possibly be his wife and was hoping that she would forever be next to him.

But she drove him away with texting. Gone forever.

Are you making her same mistakes?

Soon the woman was texting him a lot. Usually men pursued her and she slowly returned text messages and calls. With this guy, it was different. She shared how her day was going, how she felt, and everything else on her mind. They were both busy professionals. She used texting as a way to stay close, find out how he was feeling, and to see where their relationship was headed. When she didn’t hear back, she kept texting him. She wanted a response so she texted more.

He tried to reassure her that he was truly busy working, and couldn’t text back to the many texts during the day. Her insecurities began to increase. Was she being played? Did he really want a relationship? She couldn’t wait and would use texting to find out more.  She would try to be coy, teasing, and “cool”, but grew frustrated with his lack of response.

When he was out with friends, she would text to find out  – where he was and with whom. She kept  texting. She asked him for an exclusive relationship and to go on vacation with her to meet her family.

With her constant texting (translation – neediness and drama), he began to see her differently. From being the confident and fun woman that could be his forever love, he now saw her as a desperate, unstable, and demanding woman. When he broke it off, she tried desperately to resume the relationship – of course, by texting. He grew anxious and resentful as his phone continued to ring in that special ring he earlier picked  for. Soon, he felt hunted and stressed, and decided to cut her off completely.

There were other things that went wrong besides her texting. Yet texting played a HUGE part in driving him away.

Make sure you are not making these common texting mistakes when texting men.

You text someone and you feel he should respond – right? You know his schedule. You know that he SHOULD be able to respond. You begin to wonder if he got your text- so you text again. Suddenly your frustration, lack of trust or concern is starting to show. When he finally responds, you may text impatiently – why he didn’t text you back?

This will signal drama to single men.  As a Phoenix Matchmaker, drama is a top deal breaker for men. Dating drama will drive men away from you. To the man, it’s a simple text that he couldn’t, didn’t want to, or it wasn’t convenient for him to respond.

Next time, instead of wanting to be with you (or text you), he will want to avoid you and the drama he feels from you. So what do you do?

Simple- If he doesn’t respond, don’t text him again. Match his pace, stop obsessing and get busy living your own life.

If you have something you need to discuss other than being late for dinner, talk to him. In texting, you can’t hear his tone; see his body language and he cannot see yours, which are fundamental for true communication. So communication by texting only, results in misunderstandings about what something means.  As the Phoenix Matchmaker, I have had several discussions with clients explaining how rude, short and curt someone was in a text. When I am shown the text, I do not see it. The person receiving the text was reading his emotions into it. He then responds accordingly and a text fight is started.

Make the rule. Never confuse texting with communication. When there’s something important to discuss then talk to each other.

Don’t use Texting to Check up on Him

He’s out with his friends and you want to know what he’s doing? Is he having fun? If he is thinking of you? Is he being “good”?. When he’s out with friends, let him have his fun and allow him the opportunity to miss you.

If you are constantly checking on him (to make sure he behaves, is thinking of you, or why is HE out there without you anyway!) He is going to feel like you are controlling, clingy and insecure. With that feeling, he won’t become closer to you. Your texting could or will  drive him away.

You are with a great guy and you are so excited, thrilled and want to be with him all the time. Of course, you have to work, work out, shop and be with friends. So you text him to let him know you are thinking of him – constantly. Did you see what happened with the other single woman?

Like the story above, while the first few text messages may be a nice surprise, constant texting will not. While you are not texting most men frequently, when a man becomes “special, you want him to know by letting him know constantly with a lot of texts.

Texting is part of a fun way to flirt, but not as a tool to vent, communicate important issues or to control a man. When in doubt, pause 5 minutes BEFORE SENDING the text.

Increasing text messages cannot quicken the pace of his connection or desire to be with you. It can’t be used as short cut to building a healthy relationship. You may want to make sure he knows how you feel, but this needs to be shown through actions not just texting. You must have time to learn about each other and that means the dreaded four letter word – time.

Check out my other  blogs to find more dating advice that may answer other commonly asked questions. Still feel like you need more assistance in finding love? Schedule a one on one appointment with me, and I will help you pinpoint exactly what may be preventing you from finding and keeping Mr. Right.