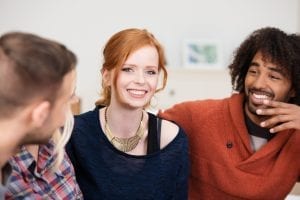 A recent dating experience has me contemplating Dating Rules.

I met Mary through friends. I liked her from the beginning – she was smart, funny, talented, and pretty. However, she had a boyfriend so I moved on and dated other people. A few years later we ran into each other again and hit it off. I found out she had broken up with her boyfriend, and not long after she contacted me on Facebook and we started going out.

She told me up front she wasn’t ready for anything serious yet because her long-term relationship had ended so recently, and I was okay with that. After a few weeks of dating, I found out her idea of “not serious” meant not only going out with other guys at the same time, but having a physical relationship with them, too. I told her that while I was fine with her going out with other guys, I wasn’t okay with her sharing physical intimacy with them, too. Not long after she told me she didn’t see herself dating me seriously, and I was hurt and felt like a piece of meat.

I told Mary I felt she had treated me unfairly and led me on; that from my perspective, her behavior was promiscuous. Mary said she thought it was perfectly fine to date and have feelings for multiple guys at the same time. From her point of view, including the physical aspect of the relationship was a necessary part of the dating process.

Then – and this is what I have a question about – she told me I was in the minority on my view of being physically exclusive in relationships. All the guys she was dating were also going out with and making out with other girls while dating her, and she was fine with it.

I understand part of dating is going out with multiple people, but I’ve never been the type to date multiple girls and make out with all of them. In your view as the Phoenix Dating Coach, is Mary’s philosophy on this normal dating behavior? I am wondering if I really am in the minority on this one.

Sincerely,
Trying to Play By the Rules

As a Phoenix Dating Coach and Matchmaker, I have talked to many Phoenix singles about their dating rules.  One thing is clear: this is one of the most confusing, complicated gray areas in dating. Maybe in the past, there were some universally accepted dating rules, but not today.

In short, to answer your question, you aren’t in the minority because there is no minority.

After years of talking to men and women about dating, I’ve learned there is no agreed-upon universal standard for dating behavior. Everyone has a unique set of dating rules and thinks everyone else has – or should have – the same rulebook.

All the confusion over dating rules can lead to lots of frustration and heartache. However, as the Scottsdale Matchmaker, I do have a set of dating rules I recommend you follow:

One woman told me she always has sex the first date to make sure there’s chemistry before starting a relationship.

Other couples wait until marriage to become sexually intimate in any way.

Some feel sex on the third date is normal and expected, but doesn’t at all mean anyone is in a committed relationship.

Others feel that once you have sex, the relationship has to become exclusive.

The point is, there’s a huge range of convictions on this subject.  It’s important you don’t assume anything when you’re dating.

Have a casual conversation about your dating rules.

There’s so much potential for miscommunication and unintentional “rule breaking”.

The best thing for you to do is casually bring up how confusing dating rules can be. Use it as a way to find out what the other person’s views are.

You might discover the two of you disagree on certain points, but at least you’ll know where you each stand.

Don’t let your desire to “make a relationship work” cause you to break your own rules.

I have coached singles who tried to adopt others’ dating rules about physical contact. They ended up feeling miserable about it.

It is perfectly okay for you to date only one person at a time and limit your physical intimacy to her.

If you are comfortable with your dating standards, then this girl was not the one for you.

While not every woman will agree with you – there are many women who do.

You want to date women with the same dating rules and values.

You just have to go out and find them.