Has This Ever Happened to you? 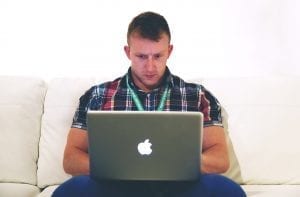 A female friend contacted me about a man who was a mutual Facebook “friend” named Robert. She said that they had chatted online and every time she asked to get together he would disappear. She wasn’t sure what was going on. Since we are friends, she asked me what I knew about him. I looked at his profile and quickly knew it was a fake Facebook profile. I did the steps below which are outlined in this blog just tell you how I instantly knew it was a fake Facebook profile.

She was interested in Robert. He was very attractive; they had great online conversations about deep topics. She thought she finally found a man in which she felt an emotional connection. When I told her it was a fake profile – she was crushed and felt foolish. She wanted to figure out how and why this happened.

With most of us receiving many friend requests, chances are you have received (and maybe accepted) fake Facebook profile requests. And that’s what happened to her and I. With about 4000 Facebook and sometimes being in a rush, I approve friends without checking them out. And I know better. (Note- Robert and I had over 60 mutual friends, so many of my Facebook friends were also deceived.)

These fake profiles exist to get your data to steal your identity, or to spam you with ads or to give you a virus that posts on your timeline. Maybe to trick you to give money to them or to play a romantic suitor, just screw in your head. These are the deceivers you want to beware of and delete from your life.

These are five easy steps that will help you avoid fake Facebook profiles. And if you do get a fake profile what do you do? First, report them to Facebook as a fake profile. Next, block them. You don’t need to waste time with Fakes.

Play it safe and be fearless online. Facebook is a Fabulous way to connect with friends, meet new friends, or find a romantic partner. Learn Joann’s tips on meeting on Facebook.

If you did fall for a fake profile, don’t beat yourself up. It happens to everybody, and that’s all we’ve learned how to catch bogus profiles. The friend who contacted me is – fabulous, beautiful, smart, and a total great catch. She wasn’t dumb. Just too trusting. Don’t let it happen to you.

Want to learn about how to avoid fake online dating profiles? Look for future dating advice that gives you proven ways to know if your Suitor is real or not.