Are you currently with someone who doesn’t let you in or express his feelings? Do you find it hard to talk about things with him? Is he hot one minute and cold the next? Meet the emotionally unavailable man. He’s intriguing. He’s a man of mystery. He’s Big from Sex and the City. And to say this man is confusing would be an understatement. If he wasn’t, there wouldn’t have been six seasons of the show.

If you’re seeing this type of guy, it can feel a lot like you’re in relationship limbo. You’re likely asking yourself questions, “what is he thinking?” and “where do I stand?”

The first step is to identify the signs:

By open up, I’m referring to when he talks about or shows his feelings. Does he have a hard time letting his guard down and being vulnerable around you? Does he ever confide any personal details about his life? If he keeps conversation at a surface level, it’s a sign he’s not ready for something serious.

2. He’s uncomfortable when you open up to him

If he doesn’t express his own feelings, chances are he is uncomfortable when you share yours. For example, he isn’t receptive if you tell him about a friend who upset you or if you’re worried about work.

Does he choose physical over emotional intimacy? It could be a sign he is uncomfortable with his emotions. If you start trying to open up to him, does he start touching you and initiating physical touch? This is a common tactic with men who want to deflect emotional closeness.

A man who knows how to handle is emotions can be there for you in your time of need. He listens and tries to find ways to make you feel better.

Does he call you when he says he will? Does he follow through on doing what he says? Inconsistency can come in many different forms. The bottom line is you can’t rely on him and you don’t trust him completely. 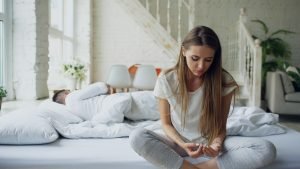 Let’s be honest: nobody enjoys conflict, but if your guy doesn’t have a handle on his emotions, he will avoid it at all costs. That kind of drama will be too much for him to handle. He isn’t invested enough to go the extra mile.

5. He isn’t making time for you

It seems obvious, but if he is prioritizing everyone but you, it’s a sign you aren’t a priority in his life. As adults, we’re all busy and we all have responsibilities, but we make time for the people who are important to us.

A healthy relationship comes from spending quality time together. If he isn’t making time or respecting your time (always late or cancelling last minute), he isn’t invested.

If you’re looking for specific tips for how to deal with emotionally unavailable men, here are four to keep in mind:

1. Get clear on what you want and know how to communicate it

Many women have a hard time communicating their standards. Whether it’s being aggressive or failing to communicate their needs, it can be a challenge.

Fun fact: Nothing is sexier to a man than a woman who knows how to set standards. It shows confidence and self-respect. He will see you as a prize and knows that to, he’ll need to bring his A-game. He will know that to keep you he needs to put the work in.

If a guy isn’t meeting your needs let him know. And you can do this in a way that comes across as assertive and not aggressive.

For example, if you are feeling like you are only seeing him on his terms and when it’s convenient for him, speak up. Due to the fear of losing the connection, a guy will string a girl along. This is because it’s human nature to want intimacy – even if it’s only once in a while. It’s dangerous to become involved with this type of man because he is usually charming. You may even have a strong emotional connection. But if he can only give you what you’re looking for one night a week, is this the guy you want? Ask yourself, “do I want to settle for happiness one night a week?”

Believe that there are men out there who can give you what you are looking for.

2. Don’t settle for anyone because you want to be in a relationship

Be honest about your intentions. It’s human nature to want companionship, and the pressure to settle is very real. But think about it this way: if you’re seeing someone who doesn’t excite you and is “good enough” is it worth it? Will that make you happy in the long run?

If you live your life based on meeting society’s expectations, you’re living your life based in fear. Oh no, what if I don’t get married by this age? or What will everyone think? When you make decisions from this mental place, they are rarely healthy or helpful.

The real question you need to ask yourself is, who are you living your life for? If it’s for you, then make decisions that support your definition of happiness, whatever that may be.

3. Walk away from a guy who says he doesn’t want a relationship

If you meet someone who tells you on Day 1 he isn’t ready to commit, believe him. And then thank him for the honesty! It’s very respectful on his part. If you choose to continue seeing him after this point, that’s up to you.

It’s important to note that there isn’t anything wrong with a guy who doesn’t want to commit. It’s normal to meet people who want different things. All that matters is that he’s honest about his intentions. So, if you’re unsure don’t be afraid to ask! Even if the truth hurts, it’s always better to know.

When it comes to how to deal with emotionally unavailable men, don’t make it personal. Most of the time the reason he doesn’t want to commit has less to do with you and more to do with him. There could be many different reasons why committing is hard for him. It could be timing, financial stress, or healing from a previous relationship.

Many women fall into the “someday” trap. Someday he will be the man I’ve always wanted. Someday he will treat me the way I want. Your best bet is looking at who he is today. He may change, but if you wait, you’re risking a big disappointment.

Here’s a great example. A woman who was a potential match for one of my clients told me a story about a man she had a brief relationship with. She explained that he wasn’t willing to compromise on many things. He didn’t like kids and she had them. He had specific days and times he could see her.

Over the years, she stayed in touch with him and they remained friends. He’s become more self-aware, realizing he doesn’t actually want a relationship. The compromising that comes with a commitment wasn’t for him.

If she decided to stay with him, she would have continued to invest valuable time and energy. She would be investing in someone who could never give her what she wanted. So, the lesson here is: when someone shows you who they are, believe them.

If you’re unsure how to deal with emotionally unavailable men, focus on yourself first. Know what you want in a partner and be honest about those standards. When he acts in a way that doesn’t align with your values, don’t be afraid to express how you feel. To be in a healthy, lasting relationship you must have those uncomfortable conversations. And in the end, they will bring you closer together.

The Phoenix Matchmaker for Professionals in Phoenix,
Scottsdale and Singles everywhere in the Phoenix Area 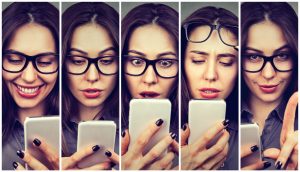 As a Matchmaker and Dating Coach men and women have shared dating texts. The good AND the bad. Especially the bad. I’ve had single guys