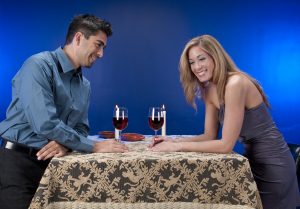 Learn a simple, easy and effective way to build rapport. Use it you’re on a date, job interview or just trying to build get a better connection with someone new.  As a Dating Coach and Matchmaker,  I use this when I want to create a positive feeling  and increasing someone’s trust.

It’s simple – mirroring.  And no – mirroring is not checking your fine self out in the mirror.

Mirroring is copying the other person’s body language movements. And we all do this naturally when we’re with we feel a connection. You can use this unconscious body language technique  deliberately when you’re trying to build a connection with someone. Science has proved this works but let’s skip that and get on to more fun stuff.

A fun way to master this is to observe people in public.

You’ll quickly figure out they’re getting along when you see two people laughing in sync. They tilt their heads in the same direction. They will both drink from their glasses around the same time. If you don’t see it? But instead you see that they each seem to be moving differently. He sits back while she leans forward. He has his hands open on the table and she’s leaning back with her arms folded. Then you can guess it’s a bad date or the two people aren’t getting along.

Practice this  mirroring on your date, boss, parent, or friend. The more you do it, the easier it becomes. AND you’ll also discover an extra benefit. Often YOU will also feel closer to the other person. Yes when you are mirroring someone’s body language, you often will feel closer to them.

This is easy and fun and you can start TODAY. Use Body mirroring-   INSTANT Connection with Body Language Secret

You’ll instantly have more of a connection and people will seem to connect with you better.