Is He Ready for a Relationship? 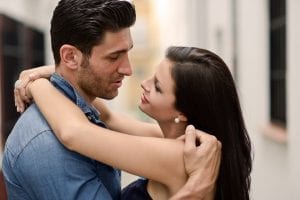 I am 24 and recently decided to get back into online dating after having my heart broken twice by men I met online. I know online dating works because I’ve met five couples who met online and got married, but it doesn’t seem to work for me. I’ve done online dating off and on for years, but maybe my strategy is all wrong.

I have a bit of a silly question. Is the best strategy to date multiple people at the same time until one commits? In the past I would do something similar but narrow it down to two guys. If I felt more attracted to one man, I would let go of the other and continue pursuit with the one that felt most likely to turn into a relationship.

The only issue is I’ve done that twice and once we’d dated two or three months, the guy I committed to ended up telling me he didn’t want a relationship after all. There are also A TON of military men out there and twice I’ve dated someone who broke things off because they wanted to be single on deployment or because they were planning on eventually getting stationed somewhere else.

I’ve opened my heart to all avenues and I know it’s a matter of time but I’m also a bit discouraged. What should I do?

Is He Ready for a Relationship?

I don’t think there’s anything wrong with your dating strategy.

You could have dated one or ten guys all at once.  Chosen one. And then found out he’s not ready for a long-term relationship.

Here’s what you have to realize. Many men actually aren’t lying when they tell you they want a long-term relationship. In that moment, they genuinely think they do. The issue is they really aren’t ready for marriage and just don’t know it yet. It’s the dating process that reveals this to them.

In general, men will not settle into a long-term relationship until he has a well-established career. They’re hesitant to commit forever until they are in a good financial situation to take care of a woman and eventually a family. It’s usually an instinctual rather than conscious decision. But ultimately it’s a good thing. These are the guys who aren’t trying to be taken care of by a woman.   Instead they want to be the primary provider n the relationship.

Of course, in the online dating world – just like everywhere else – there are men (and women) who are really only interested in having a string of short-term flings. These men are motivated by different factors. Some simply enjoy having their egos stroked by constantly adding to the long list of women they’ve dated. Others have so many options that they are always looking for a “better match” (which isn’t actually better, just new and different). Still others date solely for the purpose of playing the field. (And for the men who find themselves reading this blog, hold off on your angry email! All these statements apply to women online, too).

How Can You Tell If – Is He Ready for a Relationship?

So how do you know whether a man is ready for a relationship? You can’t always know for sure, but there are some “red flags” you can keep your eye out for. Here are some questions you can ask yourself:

What do his actions say? Watch what a man does and don’t solely rely on what he says.

Men can be smooth talkers. Some are adept at saying what they think you want to hear or what they “should” say. Not all men are like this, of course, but the old saying is true: actions do speak louder than words.

What were his past relationships like? You might not be able to get too much detail, but the main thing is finding out if he’s only been in short-term relationships. If he does open up, a huge red flag is if he chose to continue dating someone he knew it wouldn’t work out with. While a man probably isn’t going to outright say a past relationship ended because he wasn’t ready to commit, he might say it was because she was too demanding.

Is He Getting His Life Prepared for a Family?

Look at how vocal he is about your relationship. Little things like putting your status on social media or introducing you to his friends and family really can be accurate indicators of his commitment level. In other words, what you’re looking for is how publicly he is willing to show your relationship and back up his words with actions.

When a man’s actions don’t match the words he speaks – consider that your flashing neon sign. Have an honest conversation about it and be ready to back off.

Another thing to consider is the timing of when your past breakups happened – around the two or three month mark. Often, this is the exact time frame the euphoria of a new relationship is easing off and the reality of a relationship sets in, causing more evaluation for everyone. Around the three-month mark, couples are opening up and beginning to show more of who they really are.

By keeping your eyes open and paying close attention to his actions, I’m confident you’ll be able to avoid noncommittal guys, at least most of the time. It might seem discouraging and hopeless, like you’ll never find a good guy willing to stick it out, but don’t give up just yet. There are men out there who want a lasting connection, are ready for a relationship, and are willing to commit. Keep it up!

If you’re looking to find men who are ready for a relationship,

Check out my free Matchmaking for women.

P.S. Men, these same rules apply to women, too!