Is Something Wrong with You? Dating Confidence 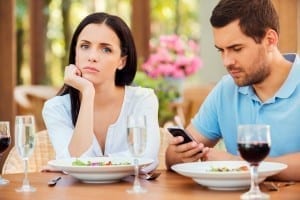 A beautiful young lady came to me, the Arizona Matchmaker,  about her dating woes. We’ll call her Mary, and she wanted to know what was wrong with her. After all, she felt something must be wrong with her based on the actions of the guy she was currently dating. She was not confident of their status.

She was head over heels for this man. He was charming, charismatic and attractive. He had the drive and energy she had been seeking. Their kisses were passionate, and he never tried to push for more. In her head, she was already married to him with kids; she was that sure he was “the one.”

But there was a slight snag in the situation. He dated her, but not very often. He was a busy man, she said, dating her intermittently and texting at most once a week. Sometimes nearly a month would go by without a message, so she’d send him one. He’d eventually ask her out again, kiss with the same in-depth passion, but then never make plans for a future date.

Head over heels or not, she was on this guy’s back burner. Other things – many other things – were much more important than Mary.

Mary knew this wasn’t quite right, but tried to tell herself otherwise. He must be interested if he kissed her so passionately, she said. And he did keep seeing her, however infrequently. So maybe he was just busy. Or it could be his normal style to only contact people every third Wednesday. Or perhaps he was on secret missions for a secret organization and he had to hide out for weeks on end.

However seemingly absurd, any of the situations could maybe be true for the guy she was dating. But what about all the other guys in the past that pulled the same stunt? Yes, Mary confided that other men she dated had acted this way, leading her to believe there was something terribly wrong with her. Wasn’t she interesting enough, or slim enough, or a big enough sports fan or a big enough bra size?

What was she missing that kept men from wanting to date her?

Mary is lovely, smart, feminine, in a successful career and surrounded by a circle of warm and loving friends. But she did have one thing wrong with her, a flaw I run across as an Arizona matchmaker and dating coach all too frequently.

The flaw? Lack of confidence, which leads some women to believe they have to settle for men who disrespect them.

Mary’s lack of confidence was prompting her to allow a man to make her his backup plan. Her self-respect was suffering because she knew was settling for less. She deserved more, a lot more. But she was instead bordering on desperation, a trait guys can smell a mile away.

Relationship-minded men are attracted to confident women. Women who know who they are and love themselves. Not only is confidence good for a relationship, but it’s key for a woman’s enjoyment of life.

How to Fix It

Make a list of all your positive traits. From your sensational smile to your compassionate nature, you have tons of things that make you a wonderful woman and a great catch. Review the list – often. Chances are you have negative thoughts marching through your head every day, and you need to evict those thoughts with a positive replacement.

Next, stop reading all those scary online articles that fill you with gloom and doom about your chances of relationship success. You know the ones. They tell because you’re over 30 or 40 or are divorced, have children or cellulite that you’re fated to live out your days as a cranky old maid.

These articles are not always accurate, the studies are incorrect and, most importantly, you are not a statistic. Studies do not determine your future. You determine it. And I’m sure you’ve met plenty of people, cellulite and all, who have happily defied the statistics.

The final tip is to put your newly developing confidence into action and stop settling for the backburner. If a guy makes it clear that you’re not all that important in his life, don’t be afraid to walk away.

You deserve to be a priority, and you’ll never get the chance to meet a new man who makes you one if you keep hanging around with a dude who only texts you every third Wednesday. Stop clinging to a relationship that isn’t working so you can free up your life for one that does. Keep reading your list, adding new traits and developing that dating confidence and true inner confidence that allows you to date the men you really want – the men that will treat you right.